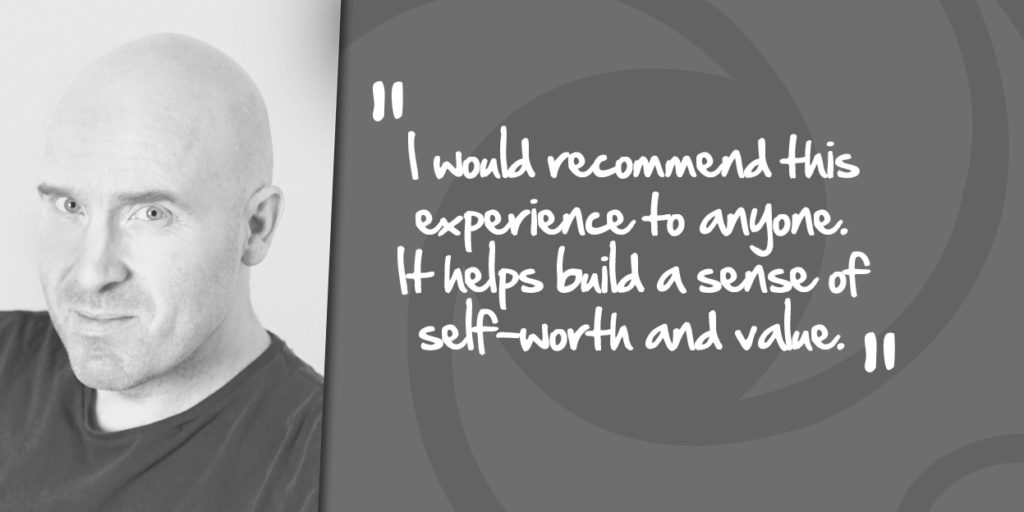 John came to The Wallich after experiencing homelessness. John has participated in some of The Wallich’s most interesting sport and arts projects.

Here, he takes us through his experience of taking part in ‘The Chimes’, a musical adaptation of Charles Dickins’ other Christmas story, where clients performed alongside professional actors.

“No one could have anticipated what came courtesy of this experience, certainly not myself.

Workshops started with body and vocal warm-up relaxation exercises. I didn’t realise then, but so began a very steep and intense learning curve, which would culminate in a run of shows where I was centre stage.

I was learning without even realising it

The workshops ensured we came on apace, yet still considerate of our inexperience. The warm-ups were a regular feature, as was the exercise of repeating chunks of text. Something I am thankful of today, as I am utilising the method to learn something else.

I was rocked when, suddenly, depression hit with a very rapid and almost fatal decent into a desperate state.

Somehow, despite this, I managed to keep going to rehearsals, but everything else fell away. I became reclusive and I could think only of suicide, this kept me locked away most of the time and anxiety would greet any thoughts of leaving.

The battles I went through some days to get to rehearsals were epic. However, I learned that when I was acting the depression left.

Then the performances started

Walking out in front of a live audience can be intimidating and the nerves would be powerful before going out.

Over the week, it got easier until the last show. I enjoyed myself on stage that night, completely relaxed and I hit every note, cue and sustain.

It had become my pleasure to stand alongside the actors as an equal; in my own as well as their eyes and by their own admission.

Our producer, director and all around wonder, Judith, thank you, for giving us this experience. It will remain with me always.

Thank you to all who played a part in this. Especially Emma, who checked on me daily to see if I was alive and to check if I had eaten. Ozzy, who became a friend over the course of this production.

I entered The Wallich homeless, but now it is looking likely when the time comes, a professional actor. Now, I would imagine that is something of a turn around.

I would recommend this experience to anyone. It helps build a sense of self-worth and value as well as confounding those who may have a low opinion of people who have been homeless.”

Read more of the powerful stories from The Wallich’s clients or find out more about The Wallich.